The St. Apostles Peter and Paul Temple was built after the Crimean War by masters, from the leading architectural school in Dryanovo. The murals are made by the famous Bulgarian artist Prof. Kozhuharov.

The temple was built on the site of the Greek church “St. Georgi” from 1810, which was low and dug into the ground. The collection of funds for a Bulgarian church began in 1859. After clashes between Bulgarians and Greeks in 1860, the temple was built by master Stoyko from Dryanovo. There was a small school in the church where Sava Dobroplodni taught.

The building is three-nave with a small narthex and an apse. The walls are stone and the covering is wooden. The middle nave is very wide. The ceilings above the three naves are equal, with the ceiling over the middle nave being raised on a high hill. In the middle there is a rosette with a stylized sun. The matroneum is vast and the altar is raised a few steps above the naos floor. The iconostasis is wood-carved, made by craftsmen from the Debar school. Much of the icons in the temple are Russian, painted after the Liberation.

The exterior architecture of the church is characterized by the decoration of the western façade, ending with a gable, folded like a ribbon. Crochet frieze encircles the whole body of the church. The details and the way of decoration depict Russian influences. There is an independent bell tower erected after the Liberation located in the church courtyard. 1

The murals are made by Prof. Kozhuharov – a Bulgarian muralist and stage designer. His work is the murals in the Kunino village hall, the cathedral “St. Dimitar “in Stara Zagora, the frescoes of the temple” St. Nicholas the Wonderworker “in Varna,” St. John Rilski “in Targovishte and” St. Petka “in Rousse. The style of writing is under the influence of the Italian Renaissance and the European Secession. 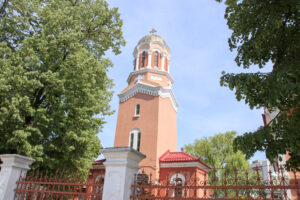 The Dorostol bishopric is one of the first dioceses in the Bulgarian lands, formed around the year 390. Its diocese is Silistra – the ancient Durostorum, known in history as Dorostol, Dyrister, Dustra, Drustar. Its first bishop was Abksentius, a disciple of Bishop Vulphila. Bishop Damian became the first Bulgarian Patriarch, reigning for 44 years from 927 to 971. Dorostol is an ancient Archbishop and Metropolitan Department. In 1871, the Bulgarian Church Council in Istanbul merged the Silistra Metropolitanate and the Cherven Episcopate into one – the Dorostol-Cherven Diocese.2

In memory of the twenty-one saints martyrs who shed their blood for faith in this region the First Council of the Holy Dorostol Martyrs was scheduled on July 9 and 10, 2016. It was attended by the Bulgarian Patriarch Neofit and the members of the Holy Synod. Representatives of local Orthodox churches were also invited. With the blessing of the Dorostol Bishop Ambrosii, a special Sabbath service of the Dorostol Martyrs was carried out.

The idea of ​​ the holy Dorostol martyrs holiday was by the Bishopric and was approved by a decision of the Holy Synod. A special service had been prepared and an icon was made. The celebration in 2016 was attended by members of the Holy Synod, representatives of the Churches in neighboring countries. The choir of the Patriarchal Cathedral St. Alexander Nevsky was also in Silistra. A special icon depicting the 21 Dorostol martyrs was made and a service and canon of the Dorostol martyrs was compiled by Hierodeacon Justin, brother of the Zograf Monastery in Mount Athos.

The cathedral St. Apostles Peter and Paul is canonically restored in 2001. That same year during his visit to Bulgaria, Pope John Paul II donated part of the sacred relics of St. Dassius to the Christian community in Silistra. The remains (bones on the right shoulder) are laid in a marble box-sarcophagus, which is stored in the temple of St. Peter and Paul. These are the only authentic relics of a saint-martyr of early Christian times whose name is known. Between 303 and 307, 12 saints find martyrdom. Saint Dasie is one of them. He confessed Christianity and refused to participate in pagan celebrations in the city for which he was subjected to torture and beheaded.

In 2013, the bell tower of the St. Apostles Peter and Paul Church has a golden glow thanks to a donation of church landlords. With a gold-plated sheet supplied by Ukraine, a new bell tower was made. New candlesticks with aspiration systems are also provided in the temple to protect the icons from damage. Since then, there is an idea to buy electronic bells with 60 melodies.

In 2014, a major renovation of the temple was made with donations. During the renovation behind the altar, human remains that are believed to belong to martyrs of the Christian faith were found.

The temple is open every day from 7 am to 7 pm.

The entrance is free and there is no special tour guide. Some of the priests in the temple are familiar with the history of the temple. Photographing is allowed. The temple does not have a special car park, but parking near the entrance is permitted. The facility is accessible for disabled people.