The Natural History Museum presents rich biodiversity of the Srebarna Biosphere Park, located near the village of Srebarna, Silistra Municipality. Situated 2 kilometers south of the Danube River and 16 kilometers west of the town of Silistra. It is located 429 kilometers away from the capital Sofia, Bulgaria. There is a bus three times a day leaving from the Sofia Central Bus Station to Silistra, as well as a train three times a day from the Sofia Central Railway Station.

Ten buses daily are traveling to the village of Srebarna along the Ruse-Silistra route.

The Srebarna Biosphere Park covers Lake Srebarna and its surroundings – about 660 hectares of guarded area and a buffer zone of about 540 hectares. There is a museum of natural history in the Park where you can see stuffed animal lake dwellers.

The museum is part of the Srebarna Biosphere Reserve and the Ministry of Environment and Water is under the authority of Silistra Municipality. It was discovered in 1983. Part of the complex is also the ecological station of the Bulgarian Academy of Sciences.

The aim is to preserve the unique biodiversity, which has been known to the Bulgarian and European scientific community since the beginning of the twentieth century.

There are 41 species of mammals, 11 species of reptiles and 10 species of amphibians, 24 species of fish, and the one with which the Srebarna Park is best known are 221 species of birds nesting here. These include Dalmatian pelican, small cormorant, shiny ibis, shovel, mute swan, white-eyed dagger, little white-fronted goose, red-breasted goose, gray goose, duck, reed squirrel, blue-eyed mustache. Here is the only traditional breeding nest of a Great white heron. 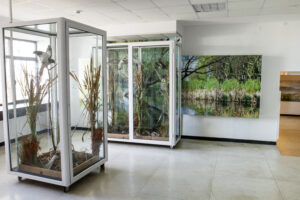 The Park is also rich in plants. It has a reed and other 139 species of plants, 13 of which are rare and protected from extinction. Only in Srebarna you can see a slender toad, a gray and red willow and many others.

Floating reed islands are another interesting thing that can be seen in Lake Srebarna. These islands, called by the local population “kochki”, never flood with water because they follow the vertical movement of the water. This makes life easier for the birds that inhabit the lake because they make their nests on these moving islands.1

The Park is administered by the Ministry of Environment and Water. It was opened in 1983. Part of the complex is also the ecological station of the Bulgarian Academy of Sciences. From the Natural History Museum you could observe the birds from the Park. A video camera is placed in the heart of the marsh, where the pelicans nest, and via video the picture and sounds are transmitted on screen in the museum. An eco-path has been made around the Park, and at some distance there are gazebos meant for relaxation, from which visitors could observe the birds.2

In 2018, 70 years of Srebarna Biosphere Park and 35 years since the creation of the Natural History Museum were celebrated. The history of the Srebarna Nature Park began in 1863 when Felix Kanitz visited the lake. He writes three volumes for Srebarna and the Danube River under the general title “Danube Bulgaria”.

The first Bulgarian, who worked and promoted this place, is Alexi Petrov – a professional pharmacist, born in the town of Pleven. For the first time he came to Srebarna in 1911, the following years many times advocated nature here to reach 1948, when the government decided that Lake Srebarna would be declared a reserve.

Later in 1977 the Srebarna Nature Reserve entered the World Biosphere Reserve Network, and since 1983 – in the UNESCO World Heritage List.

The museum is built in a strategic location with panoramic lake view. In the autumn of 1983 it opens doors for visitors from the country and abroad.

Srebarna Nature Park Museum is completely renovated under the European Environment Program in 2014. Today there is a new roof, completely renovated, the joinery, furniture, showcases and color photos with materials in Bulgarian and English are changed. Tourists can watch live binoculars, tubes and video surveillance with the pelican colony and all the inhabitants of the lake. In one of the lounges there is an exhibition room with children’s drawings dedicated to “Ecoforum Srebarna”, which has a 25-year history.

Srebarna Natural History Museum attracts tourists from all over the world with its unique unique character.

The Srebarna Biosphere Park is located exactly on the way of the migratory birds from Europe to Africa – Via Pontica. Srebarna is listed in the Register of Protected Areas by Council of Ministers Decree. Lake Srebarna is included in the UNESCO World Heritage List (The United Nations Educational, Scientific and Cultural Organisation) and in the List of Important Bird Areas in Europe (protected areas of the national ecological network within the meaning of the Biological Diversity Act).

The building offers hot and cold beverages, snacks and treats with vending machines, there are suitable places for recreation inside and outside – benches and swings.

The museum has parking spaces for cars and buses. There is a free access ramp for people with disabilities.

Here, guests can buy promotional materials and get them for free.

Photographing in the Park is allowed but it costs 5.00 BGN. The Park has two guides with English.

Children under 7 years – free of charge